Nerve-wracking US election, as outcome hangs in the balance 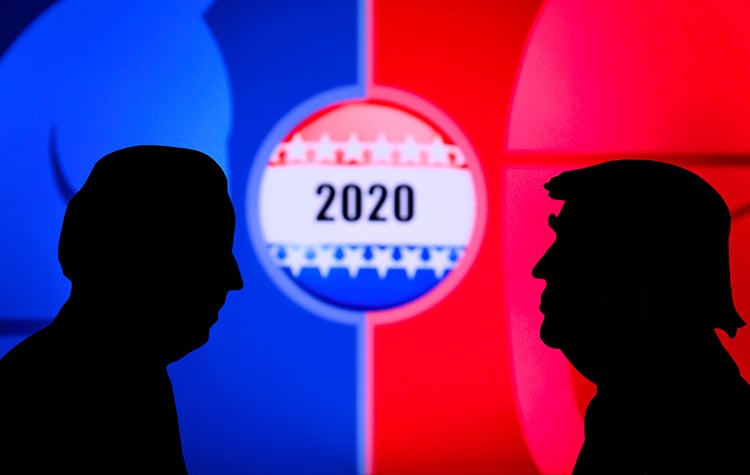 As the race for the White House continues, our experts ask a number of critical questions regarding the state of play in the US elections. What is the situation on the political front? What has initial market reaction been? What can we expect from tomorrow's Federal Open Market Committee (FOMC) meeting?

What is the situation on the political front?

With the ballots cast, the worst-case scenario in a US presidential election is unfolding. Indeed, the outcome remains on a knife edge, with both main candidates neck and neck in key states. Many swing states are not expected to report their final results until a few days from now. Michigan, for instance, is not likely to do so until Thursday morning and Pennsylvania has indicated it won’t finish counting absentee ballots until Friday at the earliest. In Wisconsin, on the other hand, we should have the results by early afternoon today.

In other words, we already know that the name of the next US president will not be announced by later today. Once again, pollsters got it wrong. They underestimated shy Trump votes and overestimated the accuracy of the data collected. This new election drama confirms the urgent need for US pollsters to significantly change their current methodology. In a televised appearance from the White House earlier this morning, Donald Trump mentioned the risk of a “rigged election” and threatened to appeal to the Supreme Court to dispute the final election count. The spectre of legal confrontation over the days, or even weeks, to come seems inevitable. According to US legislation, states have until 8 December at the latest to resolve any controversy regarding electoral disputes (this is referred to as the “safe harbor” deadline).

As a last resort, if some states are unable to resolve disputes, the Supreme Court, which holds a conservative majority, may be called upon to decide and declare the name of the winner. Clearly, we are facing a situation where electoral uncertainty may weigh on the market for much longer than expected by most.

What has initial market reaction been?

In recent sessions, the market was betting on a blue sweep, seeing the Democrats gain control of both the presidency and Congress for the next two years at least, a scenario not playing out as expected. As a result, investors are unwinding some of their blue sweep trades this morning, with the EUR/USD pair down, technology stocks outperforming, US stocks outperforming and US bond yields falling. Emerging currencies are also falling quite sharply, with the Mexican peso down 3% so far today. Volatility remains contained for the moment, but in these unusual circumstances there is an elevated risk of brutal swings in some assets, notably on the forex market. As it stands, the Japanese yen likely remains the best option to hedge against the delayed counting process.

This kind of US election uncertainty is obviously very toxic for both economic and market confidence, already at rock bottom due to the ongoing Covid-19 crisis. In the coming days, post-election uncertainty should continue, with investors and market participants maintaining a defensive stance across the board. This could help the US dollar (USD) and weigh on the euro (EUR). It could drive the EUR/USD pair below its recent lows, around 1.1600.

What to expect from the Federal Open Market Committee (FOMC) meeting?

As of tomorrow, all eyes will turn to the Federal Reserve, which will meet to discuss the latest monetary policy developments. The central bank is not expected to interfere with the process and will most probably adopt a wait-and-see position. At the end of last week, the Federal Reserve further expanded its “Main Street Lending Program” to cope with economic uncertainty by cutting the minimum loan size for three Main Street loan facilities, from $250,000 to $100,000. There shouldn’t be substantial change in the statement, apart from mentioning higher political risk and updating the FOMC’s economic outlook. A recent surge in Covid-19 cases will certainly influence those attending the meeting.

As part of the press conference, Federal Reserve Chair Jerome Powell should continue to identify the path of fiscal policy (i.e. talks between Democrats and Republicans about a new stimulus package) and Covid-19 as the most important factors in its forecast. As Powell’s term as Chair is up for renewal in early 2022, with the nomination to be made by the next US president, he has every interest in not taking a stance on the ongoing battle for the White House.