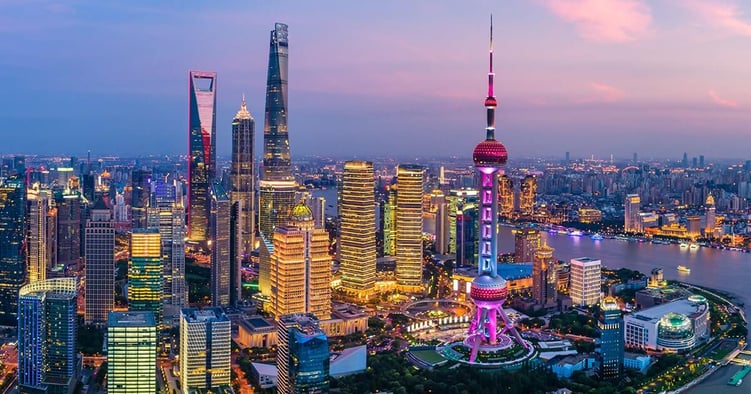 Emerging economies in Asia present a host of opportunities for businesses. On the exchange market too some Asian countries and currencies are the subject of growing interest. In this article, we analyse four currencies in the region, the Chinese yuan (CNY/CNH), the Hong Kong dollar (HKD), the Thai baht (THB) and the Singapore dollar (SGD).

By the time it began circulating for the first time in 2002, 12 European countries had adopted the euro as their national currency. In one fell swoop, a great deal of foreign exchange opportunities simply evaporated. In 2015, Lithuania became the 19th country to adopt the single currency and additional EU Member States are expected to follow suit over the coming years.

Upon the elimination of these European currencies, currency market players quickly turned their attentions elsewhere. Emerging markets in Asia were almost instantly perceived as fertile ground for currency trading.

But that raises the question, which Asian currencies are the most closely followed by the forex market? What emerging countries or currency areas in Asia currently present the most opportunities for businesses?

Our overview of the Chinese, Hong Kong, Thai and Singaporean currencies will give you a better understanding of the factors affecting their exchange rates, as well as developments likely to impact the economies of their respective countries.

The Chinese currency, commonly known as the renminbi (RMB) or yuan (CNY/CNH), presents a number of specificities.

The renminbi (RMB) is China's official currency and its medium of exchange, while the yuan (CNY/CNH) represents this currency’s unit of account.

One yuan, two systems, from “onshore” to “offshore”

The onshore yuan (CNY) is not freely convertible and is used almost exclusively within mainland China.

The offshore yuan (CNH), launched by the Hong Kong Monetary Authority (HKMA) in 2010, is the convertible version of the Chinese currency and is traded, well, offshore. One notable advantage it presents for non-Chinese companies is the possibility to pay local suppliers their procurement fees directly in yuan.

But how does the People's Bank of China manage the country’s complex currency?

Another peculiarity of the Chinese currency is the interventionist policy of the country's central bank, the People's Bank of China.

How does this exchange rate system work?

While this model is advantageous for Chinese exports in particular, the widespread perception of the yuan’s undervaluation is often blamed for certain global disparities, including a sizeable US trade deficit with China.

Conversely, the offshore yuan (CNH) fluctuates in accordance with supply and private demand on the foreign exchange market.

In 2019, the yuan accounted for just 1.23% of global foreign exchange reserves, but it was the eighth most widely traded currency on the foreign exchange market. Given the country’s reach in international trade, it is no surprise that China is doing everything possible to assert its influence in this area and increase the global use of its currency.

The yuan is now part of the IMF's Special Drawing Rights Basket (SDR), a monetary instrument used to supplement member countries’ official reserves and increase liquidity levels in the global economy in times of shortage.

But what is the currency board’s role?

Characteristics of a currency board:

So, what status does the Hong Kong dollar benefit from today?

According to official figures from the Bank for International Settlements (BIS), between 2016 and 2019, the Hong Kong dollar climbed from 14th to 9th place in the rankings of most traded currencies. This considerable increase in volume over a short period is probably due to the ongoing political uncertainty in Hong Kong and renewed tensions with Beijing.

Increased volatility has led to a number of movements on the foreign exchange market in recent times.

According to SWIFT, the Thai baht was the ninth most widely used currency in international payments in 2019. The kingdom’s central bank, the Bank of Thailand, is responsible for its issuance.

True to its status as an "exotic currency", the Thai baht is considered illiquid. This means that its trading volume is relatively low, and it can be volatile.

Indeed, according to the Bank for International Settlements (BIS) in 2016, the Thai baht ranked 23rd among the world's most widely traded currencies, due, in part, to a large bid-ask spread.

So, what was Thailand’s role in the Asian financial crisis?

The Asian financial crisis of the 1990s

But what has happened since then?

Rebound of the Thai economy

The Thai economy has since recovered from the crisis days of the 1990s and the country has continued its development, though growth has slowed somewhat in recent years. According to The World Bank, Thai GDP grew at an annual rate of 5% between 1999 and 2005. However, this figure declined to 3.5% per year between 2005 and 2015.

Nonetheless, the Thai baht is attracting increased currency market attention because the country's economy, which is highly oriented towards tourism and exports (the latter accounting for 66% of Thai GDP), has become one of the most stable in the region.

Compared to neighbouring Malaysia, Thailand is significantly less dependent on trade in commodities and oil, meaning stability is not adversely affected when oil prices are low.

In January 2020, Thailand became the world's sixth largest exporter of fruit, behind Spain, the Netherlands, Mexico, the United States and Chile. The value of its fruit exports in the first ten months of 2019 was estimated at 3.213 billion dollars (USD).

As an international financial hub with an attractive tax regime, Singapore boasts a relatively young national currency, the Singapore dollar (SGD). The Singapore dollar enjoys a high level of liquidity. According to the Bank for International Settlements (BIS), it was the 14th most widely traded currency on the foreign exchange market in 2019. According to SWIFT, it was the world’s 10th most important currency in terms of international payment volume for the same year.

The Singapore dollar, then and now

Following the independence agreement signed between Singapore and Malaysia in 1965, the monetary union between both of these countries and Brunei came to an end. The island state of Singapore thus began issuing its own currency. Initially pegged to Britain’s pound sterling (GBP), the Singapore dollar was then briefly pegged to the US dollar, and subsequently pegged to a basket of currencies between 1973 and 1985.

Since the 1980s, it has floated more or less freely on the forex market, but remains subject to a strict fluctuation band within a range kept secret by the Monetary Authority of Singapore (MAS).

Singapore's economy is highly developed and highly concentrated on high-tech exports, such as chemicals and electronics. The country’s strategic geographic location between the Indian and Pacific oceans, along with its extensive port activities, make it a hub for the oil refining industry, among others.

Foreign direct investment – a cornerstone of the local economy – is stimulated by an attractive tax policy, as well as a highly specialised tertiary sector, particularly in banking and wealth management services.

Given the limited arable land available, the Singaporean economy’s performance and the exchange rate of the Singaporean dollar depend heavily on the value of raw materials and natural resources, which are imported in large quantities in order to manufacture products for export.

According to IMF figures, Singapore ranked third in the world in terms of GDP per capita in 2019, behind Qatar and Luxembourg.

For a number of years, and in particular since the elimination of numerous European currencies with the arrival of the single currency in 2002, the foreign exchange market has been showing increased interest in emerging Asian economies and their currencies. This is particularly true of the Chinese yuan (CNY), the Hong Kong dollar (HKD), the Thai baht (THB) and the Singapore dollar (SGD).

The case of the yuan is complex notably due to its limited offshore trading, its perceived undervaluation and the country’s unique exchange rate regime. The Hong Kong dollar, which remains pegged to the US dollar (USD), is considered one of the most liquid and stable currencies in the region. As for Thailand, while the country’s economic development since the 1990s has been impressive, the Thai baht remains an illiquid currency. For its part, the Singaporean economy is highly advanced, but the Singaporean dollar remains exposed to adverse developments on the commodities market, as well as drastic changes in oil prices.

What's next for Asia?

These four countries have enjoyed sustained growth for a number of years, and they present considerable opportunities for businesses operating internationally. However, there is an inherent risk to trading in emerging currencies and major currencies alike. Businesses with overseas operations should therefore explore opportunities abroad, but consider the benefits of using foreign exchange hedging solutions to limit such risk.