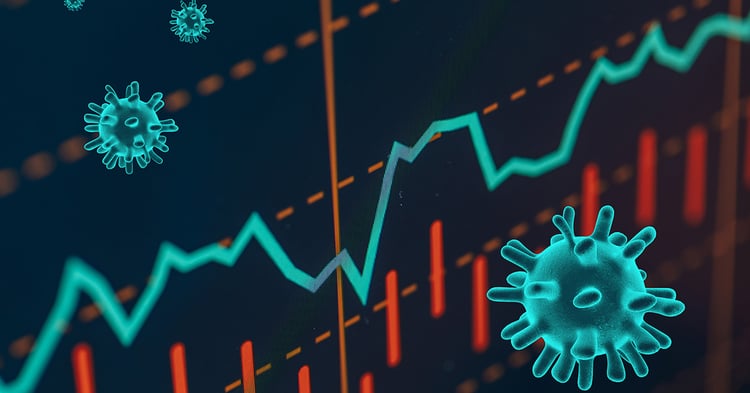 The economic outlook for Q4 2020, events likely to influence volatility on the forex market, as well as solutions to guard against this. Check out the key takeaways from our recent webinar.

The Covid-19 crisis dominated the second and third quarters of 2020. Both the health and economic crises have heavily impacted every sector of the economy and every country around the globe. However, at this stage of the pandemic, some appear to be faring better than others.

This begs the question, what kind of recovery can be expected in these circumstances? Which countries and regions currently find themselves in a relatively strong position? And which major risk factors might impact the foreign exchange market over the coming months?

Though the worst effects of the health crisis began to ease somewhat during the lockdown period between March and May, the coronavirus reproduction rate has risen since mass reopenings in various countries. The effects of the second wave are now being felt, particularly in Europe and the USA, with the consequences for economic recovery yet to be determined. It is worth noting that, in addition, a third wave of the virus in the first quarters of 2021 cannot be ruled out at this time.

We are currently witnessing a K-shaped economic recovery, resulting in strong growth for certain sectors and businesses, which strongly contrasts with a marked deterioration for others. Businesses that are primarily digitally led and those that make use of technological solutions are experiencing a stronger recovery and are expected to return to pre-crisis levels of activity in the short term.

On the other end of the spectrum, many businesses, and many SMEs in particular, are experiencing a weak recovery. A wave of bankruptcies is also expected in sectors hit especially hard by current events. Manufacturing industries have been somewhat less impacted by the ongoing crisis, while sectors directly affected by social distancing measures, including the travel and catering industries, are experiencing major difficulties. Tourism alone is expected to lose up to $1.1 trillion (USD) in 2020.

What kind of recovery is taking place in France, the US, Europe and China?

There are considerable differences between the world’s major economies when it comes to the current state of economic recovery. These differences reflect regional specificities, both in terms of coronavirus prevalence and the economic context and official response.

Although many risks are likely to have a major impact on the foreign exchange market over the coming months, we have identified six with major destabilising potential. Among these, continually high savings, the US presidential election, Brexit, a Scottish independence referendum, a third wave of Covid-19 and deflation.

A lack of consumer confidence could continue to encourage savings, causing a fall in consumption levels.

If there are any electoral irregularities, particularly regarding the 50 million votes to be submitted remotely, the results could be contested. Any subsequent legal battle would be both long and arduous, going as far as the Supreme Court, now mostly comprised of conservative judges. If such events were to transpire, the winner’s name, rather than being announced on 3 November in the evening, would not be known until weeks or even months later.

Although the deadline for finalising a trade deal between the UK and the EU remains set for 31 December of this year, the British government had set a soft deadline for 15 October. This failed. Given the recent tensions between London and Brussels, there are two probable scenarios by the time negotiations are concluded at the end of the year:

If a no-deal Brexit comes to pass, the Scottish executive has indicated that it intends to request a second referendum on a potential secession. Recent surveys point towards a highly divided Scottish population:

It seems increasingly likely there will be a third wave of coronavirus in 2021. Potential restrictions introduced in order to curtail its spread would bring further economic consequences.

Low consumption levels, combined with a rise in the unemployment rate, could exacerbate the risks of deflation in 2021. Whatever the case may be, inflation will be limited in 2021 due to high supply and low demand. This will naturally lead to a fall in prices. The European Central Bank (ECB) will intervene to ease any risk of deflation by lowering its key interest rate.

Whatever the period, additional factors and developments can exert a significant influence on the foreign exchange market, from central bank announcements to consumer confidence indexes. To learn more about some of the major economic indicators that influence currency market fluctuations, take a look at our piece on the international economic indicators to be monitored in the forex world.