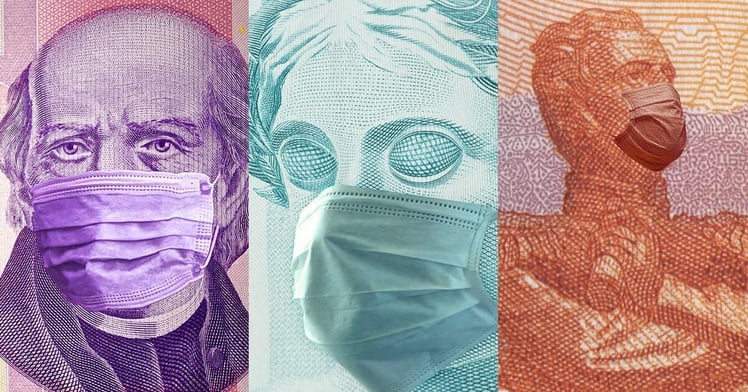 Emerging countries are suffering disproportionately from the Covid-19 pandemic. This is reflected by huge drops in the Russian rouble and the Mexican peso, among others. The question remains, which currency will take off once again in the second half of this year?

Covid-19 continues to rage mercilessly through emerging countries. After the United States, countries like Brazil, India and Russia are currently recording the highest number of infections. In Mexico alone, both the number of patients and the number of victims is even higher than in European hotspots such as Spain and Italy. The vulnerability of these developing countries is also evident on the foreign exchange market. In the first half of this year, the Brazilian real, the Mexican peso and the Russian rouble each fell by 13% against the US dollar. Isn’t it time for a recovery after such a disastrous six months? And when there is a glimmer of improvement, which currencies will be leading the charge?

The rouble as a contender
At first glance, the Russian rouble seems like it might make a great contender for the role of Comeback Kid on the currency exchange market over the next few months. The country’s economy depends heavily on oil exports, and the price of a barrel of Brent oil has more than doubled – from less than $20 to over $40 – since 21 April. That has given the Russian economy a much needed boost. On top of that, OPEC predicts a sharp increase in oil prices for 2021. However, when you compare this with previous emergency situations concerning the rouble, a crucial piece of the puzzle is missing. In the past, the Russian Central Bank raised the interest rates dramatically to keep the currency afloat, even by as much as 15% on occasion. In June, however, interest rates were cut from 5.5% to 4.5%, as inflation risked falling well below the official target.

The peso and the price of oil
The Mexican peso is an example of another currency gaining ground in the wake of recovering oil prices. However, the US economy remains the decisive factor in the development of this currency, with the neighbouring juggernaut being Mexico’s most important trading partner by far. If economic recovery were to slow down in the US, it would likely pull the brakes on the peso’s ability to gain ground. Of the three currencies mentioned, the real remains in the best position. Coinciding with a recovery in the Chinese economy, the export of raw materials is beginning to show positive signs. In addition, if things go well, Brazil may well exhibit a current account surplus for the fourth month in a row, the longest such occurrence since 2007.

The real is less fragile
Brazil is a lot better off than it was just a few years ago. At that time, the real was invariably placed in the ranks of the fragile five. A term used to describe emerging markets’ most vulnerable currencies. In the meantime however, Brazil has achieved a much more favourable trade balance and the country boasts sufficient currency reserves to give the real a genuine boost, should this be necessary. Add to this the fact that the real has fallen much lower than the other currencies discussed here and there are plenty of arguments that weigh in the Brazilian currency’s favour, suggesting it will be at the forefront of a possible recovery in this category. However, the situation in the first six months of 2020 proves that things can take a very unexpected turn, even as far as the foreign exchange market is concerned. All is yet to play for.

EUR/GBP: heading for 0.92 this summer

Crazy week for the euro